We illustrate the use of a primary data analysis method for comparing adaptive interventions that are embedded in a sequential, multiple assignment, randomized trial (SMART). Here we illustrate the use of the SAS GENMOD procedure to analyze a fake data set similar to the ADHD example described in Nahum-Shani et al. (2010).

A SMART is a multi-stage randomized trial, where each stage corresponds to a critical decision. Each participant progresses through the stages and is randomly assigned to one of several intervention options at each stage (Murphy, 2005). In this context, one type of primary data analysis focuses on addressing research questions concerning the comparison of adaptive interventions that are embedded in the SMART design.

Below is a figure illustrating the sequential, multiple-assignment, randomized trial (SMART) for the Adaptive Interventions for Children with ADHD study described above and in the paper. 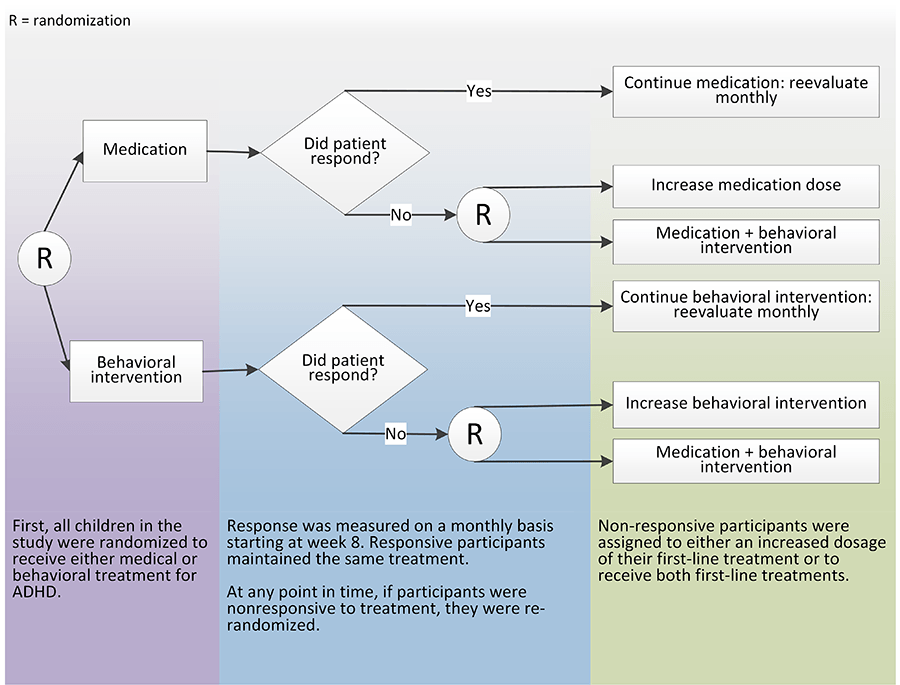 This experimental design can be extended to more than two stages and to settings in which both responders and non-responders are re-randomized; for simplicity we focus on a two-stage setting.

The four adaptive interventions embedded in this SMART design are as follows:

For references and more information about this SMART design and primary data analysis refer to Nahum-Shani et al. (2012)1.

If you use this code in your own research, please cite the article listed below.

Portions of this website and the related scientific research were funded by National Institute on Drug Abuse (NIDA) awards P50 DA039838 and P50 DA010075 to The Methodology Center at Penn State, Institute for Educational Sciences award R324B180003 and NIDA award R01 DA039901 to the University of Michigan.